There are those who say that Christian holy days bear no relation to when the original event actually occurred. Instead, they say, as early Christians spread the faith, they co-opted existing pagan holidays. Christmas was placed at the time of the Winter Solstice, and Easter replaced pagan fertility celebrations held at the beginning of spring.

I can’t say the same for Christmas, but Easter, at least, is where it belongs. In Luke 22, we learn: “When the hour came, Jesus took his place at table with the apostles. He said to them, ‘I have eagerly desired to eat this Passover with you before I suffer, for, I tell you, I shall not eat it again until there is fulfillment in the kingdom of God.'” 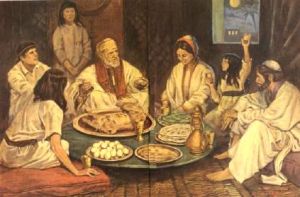 This year, Passover is celebrated from 25 March until 2 April, so in the Jewish reckoning of days, it begins at sundown tonight. Since the Jewish calendar is lunar based, while our calendar is solar based, and since we adjust dates so that we can commemorate Christ’s death on Friday and His resurrection on Sunday, there is some variance, but not much.

The celebration of Passover, or, if you prefer, Peach, is called Seder. A few years ago some friends shared a Christian Seder with us. I wanted to celebrate the traditions that Christ had shared with his family and ultimately with his apostles. I found the Seder to be very moving, and a wonderful tie between the Old Testament and the New.

It also reminded me that Jesus the Messiah was sent to the Jews. That He and his apostles were Jews. But, fortunately through the grace of God He was shared with everyone.

So, Chag Sameach! (KHAHG sah-MEHY-ahkh) Literally, “joyous festival.” This is an appropriate greeting for just about any holiday, but it’s especially appropriate for Pesach (Passover). For more information, I linked the previous to an interesting site on Jewish beliefs.