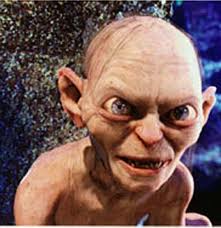 Gollum
The Lord of the Rings

There have always been evil people. Nero. Genghis Khan. You know the type.

But there are some people who defy description when it comes to being devious.

Like the guy who decided to put the candy at eye (and hand level) for kids sitting in the grocery buggy seat.

The evil genius who decided that towels in public restrooms should be dispensed so that you have to tug on the paper towel with soggy hands.

The fiend who decided that the lever on some cars used to shift gears would control the wipers on others.

The American publisher who decided that news articles would not occupy a single page but would be continued on page 10.

So be careful – you never know what they’ll come up with next.