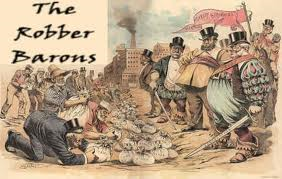 Our current economy is due, to a large part, to those who had the knowledge, the ability and the guile to work the system.

The executives of companies “too big to fail” who skimmed the profits, got a government bailout and paid themselves bonuses out of the bailout.

The mortgage company executives who made questionable loans and bundled them so that the risk was no longer identifiable.

The derivative traders who made the investment instruments so complicated that no one knew what they were worth.

We’ve always had those types.

But somehow the Medicis and their contemporaries gave us the art of the Renaissance.

The robber barons gave us coast to coast railroads and telegraphs.

I don’t credit the rich and powerful for these benefits. Instead, I think this is God’s “will be done, on earth as it is in heaven.” Even the greediest, most despicable person’s actions will ultimately reflect God’s will.

One response to “Thieves, Scoundrels and Billionaires”