Wisdom from Alex the Parrot 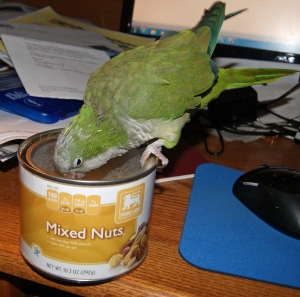 Alex, like most pets, believes that his human exists to pay attention to him and to give him treats.

Not too different from most of us.

I was giving him pistachios – one at a time so that each evening he’d eat three or four of them. Unfortunately, the shells ended up everywhere. One might be tempted to believe that he preferred the shells to end up outside his cage rather than in it. I switched to a can of cheap mixed nuts which have peanuts as the majority item.

As he ate his way through the contents, I stopped trying to figure out which peanut to give him and let him poke his head into the can to pick his choice of treat. I think that he enjoys the ability to make a choice even more than the treat itself.

When faced with a choice, be thankful for the freedoms that permit you to choose. Then, quite literally, for the love of God, choose wisely.