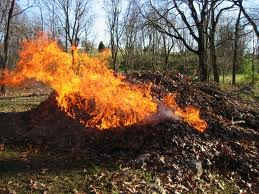 When I was growing up, people would rake up the leaves in the fall, sweep them to the curb and burn them in the street. The smell of fall was the smell of burning leaves.

Some people thought the smell was attractive. I haven’t thought of it in years. When I lived in Florida, there were few leaves to burn, and when they did it was usually an out-of-control wildfire. Burning palm trees smell like someone torched the dump. Wyoming had lots of wide open spaces unencumbered by trees, so there was no need to burn leaves.

Open fires are frowned on in Virginia. That frown comes with a citation and a fine.

Over time, up here in Ohio and Michigan, burning leaves changed. Many of the concrete or brick streets were covered over with asphalt. Asphalt tends to melt and/or burn, so burning fell out of favor. If you smelled burning leaves, it probably meant that someone parked over top of a pile of leaves and the heat from their catalytic convertor started a fire. Somehow the mix of burning car and burning leaves isn’t quite the same.

So it surprised me to find in southern Michigan – just over the line from Toledo, OH – to be exposed to the ubiquitous smell of burning leaves.

I think that burning leaves, whether autumn or tobacco, belongs to a time now past.