I’m Not Paranoid, But…

I thought it was bad enough that governmental agencies were spying on us. I mean, the Chinese, Russians and North Koreans were no surprise, but when you have to worry about Luxemburg and Monaco, it’s a different story.

In any case, I read the other day that a software guru checked his LG television and found it was tracking his viewing habits and sending the information back to the company.

I’ve been suspicious of my coffee pot for some time.

I know it’s watching me. 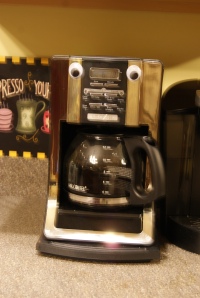