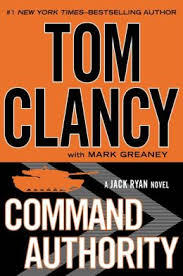 When I’m not reading geek materials (from “Biblical Archaeology” to “Make Magazine”) I like science fiction or techno-thrillers. I’m told that the difference between a mystery and a thriller is that in a thriller you know “whodunit” early in the story.

A techno-thriller includes references to real or potentially real, tools and methods. One story is that Clancy’s books were so well researched that he inadvertently pieced together open source material so that some things that appeared in his book(s) were actually classified.

I’m reading Tom Clancy’s last novel, Command Authority, and am at the chapter in which there are riots in the Ukraine along with a struggle between those who want to ally with the European Union and those who want to reconnect with Russia as in the days of the Soviet Union. Of course, today’s headlines are about that as well.

At this point in my life, I prefer the ersatz thrills such as rollercoasters where it feels dangerous, but isn’t. I’m going to turn off the news and read Clancy’s book.