Logic Is a Pretty Flower that Smells Bad* 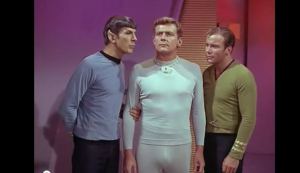 We’ve all been in this situation.

Dealing with someone who is immune to logic, whose mind is made up and doesn’t want the facts to dissuade them.

Someone who has neither our experience, education nor knowledge, but who has some modicum of control which they assume to be legitimate authority. As the old saying goes, “The person with the least amount of authority exercises it to the fullest.”

The clerk at the oil-change counter at Wal-Mart.

The Department of Motor Vehicles.

It’s so frustrating dealing with these situations, but in the giant scheme of things they are meaningless; nevertheless like a paper cut they are so irritating – all – day – long!

* “Logic is a little tweeting bird chirping in a meadow. Logic is a wreath of pretty flowers which smell BAD. Are you sure your circuits are registering correctly? Your ears are green.” Spock in “I, Mudd” from the original Star Trek.