We Are Oh, So Smart! 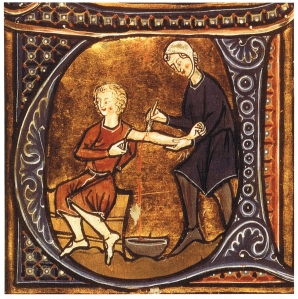 We twenty-first century humans are the pinnacle of humanity in so many ways. We can kill one another with great efficiency AND effectiveness. We can blather to the entire world about absolutely nothing, thanks to smart phones and social media (excuse me while I shoot a selfie).

No one in history was as great, and wonderful (and, might I add, humble) as us. We are the undisputed technological winners.

There is that thing about Damascus Steel that the ancients could do with sword blades that we have never duplicated. Imagine what amazing Ginsu knives could be made of that! Or weapons for Seals and Delta Force! Or surgical scalpels and medical implants!

We’re proud about our computers and claim them as our own, but then there’s that mechanical computer from the first century found in a shipwreck by Greek sponge divers. Some say that if it had not been lost, civilization would have advanced so that space exploration would have begun centuries earlier.

And now we find that the bacteria that can whup our best antibiotics (with one pseudopod tied behind its back), Methicillin-resistant Staphylococcus aureus (MRSA) can be controlled by a concoction from the tenth century. An eye salve, found in Bald’s Leechbook, made from fermented, garlic, cow bile, and wine appears to be effective against the disease in several trials. “Leechbook” because the barabarian healers still believed in bloodletting—yet the barbarians got this one figured out better than we did. (Oddly, my insurance provider doesn’t have it in their pharmaceutical formulary, so if I need it, I have to pay for it out of pocket.)

If we truly are smart, we’ll honor those who came before, and figured out some things that demand our respect.