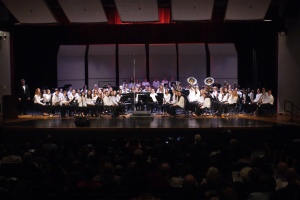 My daughter played in a symphonic concert this weekend, and I was the designated (volunteer) photographer. I used to do a lot of photography in my younger days and still remember a thing or two. Of course that pales in comparison to what I’ve forgotten (e.g. if you own multiple digital cameras, put different lenses on them rather than trying to juggle two lenses at the same time).

Taking the pictures is the easier part, and while darkrooms are rare, many of the darkroom techniques have migrated to computer. So, when I got home, I sorted the photos. I then dodged and burned images, adjusted framing just like the old days, but without getting my hands wet. I’ve gotten used to this by taking the pictures at my kids’ soccer games. However, I began to think (always dangerous) that while sports photos are an American tradition requirement, photos of a concert are a bit different.

When you think about it, it just seems odd to use one artistic medium to share another. It’s true that music can reflect other arts—Mussorgsky’s Pictures at an Exhibition is an excellent example. However, it seems more difficult to work in the opposite direction. I don’t think that even a masterpiece painting could reflect a particular piece of music such that the viewer would recognize the melody. I suspect even the greatest choreographer could not create a dance that causes the audience to taste peanut butter. Mixing media is like writing a haiku explaining hockey—it just doesn’t work.*

So, my photos may not transmit, explain, or even reflect the melody, the harmony, the counterpoint, or even the thematic chords that were performed, but it does give the parents a chance to see their kids on stage.

* Although my son wrote his college entrance essay on soccer and its comparison to international relations.