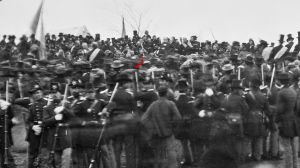 (I had written this a few days ago, but life got in the way of posting it.)

Speeches, especially speeches by politicians tend to have a powerful opening and a powerful close. The rare speech is powerful throughout; even rarer, it is short..

On this day (19 November) in 1863, President Abraham Lincoln was at the dedication of the military cemetery in Gettysburg, Pennsylvania. In school, many of us had to memorize that speech, but too few of us could appreciate it at such a young age. Sadly, too few adults appreciate it either. I’d like to comment on two sentences in the middle of the speech, which was only two paragraphs. The first is the last sentence of the first paragraph:

The world will little heed, nor long remember, what we say here; but it will not forget what they did here.

Did Lincoln believe this? It’s quite possible given that these were merely a few words he spoke at a cemetery dedication. Maybe he believed that much of what he did went unnoticed, and that is true of all great men. History has a habit of airbrushing PhotoShopping the warts and frailties of its heroes so the person more accurately resembles the marble busts in hallowed halls; others, history relegates to the footnotes.* Hero or not, recognized or not, a great man or a great woman does what they know to be right regardless of the consequences. The truly great tend not to be on the covers of magazines or offered reality television programs. The truly great understand that there are things greater than them, so they stand by their ideals, and stand in the shadows behind them.

As it turns out, the world did heed and remember Lincoln’s address. It also remembers the important choices the man made. When some began to revise history after the Civil War, Robert Todd Lincoln, his son, charged the president’s two secretaries–who handled his communication and sat in on most meetings–to write the factual history before it was forgotten or corrupted.

The second and final paragraph began:

It is for us rather, the living, to be dedicated here to the unfinished work that they have thus far so nobly carried forward.

That was not a charge merely to those close enough to hear President Lincoln’s speech, nor merely those in attendance, or even those alive in 1863. It is meant for all of us; we are all to continue the work of upholding the ideals of a democratic republic; To continue to view all people as deserving respect. We may be a nation of laws, but the laws are intended to provide order for the citizens. Some forget “Governments are instituted among Men, deriving their just Powers from the Consent of the Governed” as stated in the Declaration of Independence.

Surrounded by death, in the middle of a war that had split the Union, certain that he would not survive his time in office, Lincoln’s focus was to focus on the living, including us, and remind us to keep this precious gift alive.