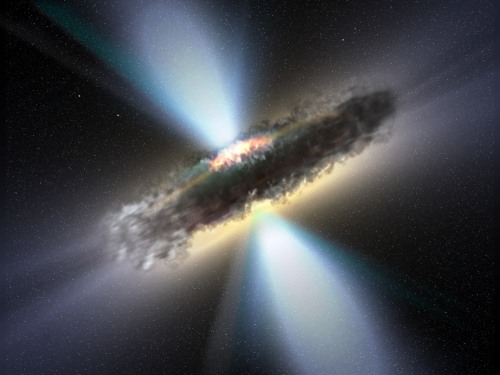 Image courtesy NASA; NOT the black hole discussed on the blog.

Scientists are busy with the Large Hadron Collider, probe spacecraft to the outer planets, telescopes and mathematics to understand the wonders of the universe.

They really don’t need to go so far and invest in so much technology; it’s far easier to study much closer to home. For example, I have constructed a black hole in my own home. I confess that it was quite by accident, but it’s here and functioning nevertheless.

It started out as a simple cardboard box (shades of Calvin and Hobbes and their transmogrifier!). Its initial purpose was a place for me to drop my keys and other essentials that I tend to carry or keep in my pocket: eye drops, Chap Stick, pens, wristwatch, etc. Over time, it has continued to gain mass as church bulletins, programs for school concerts were added.

Naturally, I assumed that my wife or kids were responsible, but they vehemently denied putting anything in or on the box. Naturally, I accept these statements as absolute fact, with the logical conclusion that its gravitational attraction has become strong enough that anything not firmly secured elsewhere would make its way into the box. It is no longer a surprise to find soiled socks, soccer gear, or even the occasional electronic device in the box.

I’ve observed the lights in our house and realized that the black hole may be at least one reason that the house is always darker than we like it. Buying more lamps and increasing the bulb size does not seem to help. In addition, compact fluorescent lamps and LEDs guaranteed to last five years have the light sucked out of them in mere months.

I’ve tried to examine the light near the black hole to see if it is bent by the mass of the black hole, but have not been able to objectively observe this. A friend claims that with special equipment (a six-pack of beer) the bending of the light should be visible, but I haven’t tried that.

So while we have not yet achieved production of energy by cold fusion, constructing a black hole has now been successfully achieved. I am hopeful that the Nobel Prize committee is writing out a check to me at this very moment.

This entry was posted in Uncategorized. Bookmark the permalink.

2 responses to “Enjoying Astrophysics and Quantum Mechanics at Home”