Nature’s Majesty Is Better at a Distance

Wild animals are majestic. They are beautiful.

I lived in Wyoming, and I admit, the antelope were awesome—until you saw them up close. Like humans, they were—to say the least—imperfect. Their fur tended to hang in clumps and they smelled, well, nasty. There was a golf course at F. E. Warren Air Force Base and the antelope enjoyed standing in the middle of the course because: a) they knew they could not be molested, and; b) they loved to show humans who was in charge.

Okay, let’s make it more inclusive. Seagulls look almost like something a poet would have described at a distance. Have you seen them up close? They are sea-going pigeons. Attractive? Not so much. 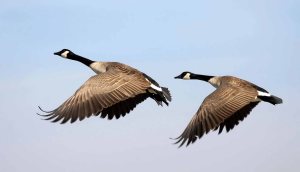 Then, there are the magnificent, imperious Canadian Geese

Or, as I often refer to them, rats with feathers.

Although they are picturesque, they leave a trail of green fecal matter anywhere within 2 ¾ miles of their presence. They attack anyone who comes near them, block traffic while the flock slowly strolls across a street. With the global warming that supposedly isn’t happening, they no longer migrate as far as they once did. In some cases, such as here in Virginia, they’ve become a year-round fixture.

I recently saw a vehicle that belonged to a “Canadian Goose management company.” A quick search on the internet brought up quite a few companies that advertise that they will remove the geese from parks, parking lots, private property, etc.

Next, we need protection from those incorrigible chipmunks!

This entry was posted in Business, Culture, Humor, Management, Philosophy. Bookmark the permalink.