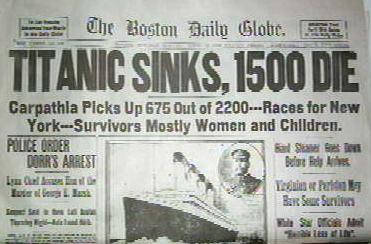 In newspapers, major event headlines were spread across the front page with large type. Day to day major-ish events had headlines in large–but not-so-large–type placed approximately mid-page to the right margin. Lesser events that either deserved front page coverage, or, on a slow news day were better than nothing, went to the left with (yawn) somewhat large type, but so what?

Notice the above. Major margin-to-margin headline, with sub-headlines for supporting stories below, on the right. The left? “Police Order Dorr’s Arrest.” I know the Titanic, but who the heck is Dorr? I Googled Dorr, but unless that Door was an attorney, I struck out.

So, to recap:
Across the Top=IMPORTANT.
Center to right side=Sort of, kind of important.
Left side=Not so much, but we want you to read it anyways.

However, now, in the marvelous 21st century, online news sites place their major stories on the left.

I guess we can claim that as progress.