After being politically correct for the past few weeks (some by omission), here we go. 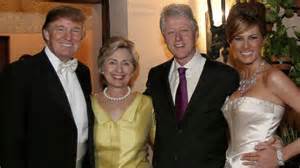 The Clintons at the Trumps’ 2005 Wedding

Now that the presumptive candidates (and, they’re both quite presumptuous, thank you [rim shot—bada-bing]) are in place, the world is beginning to react.

Great Britain: “I say, old chap, do you miss King George the Third yet?”

Vladimir Putin (AKA Russia): “Of course this is all according to my plan, but I assure you that no Russian military troops were involved!”

North Korea: “As a gesture of confidence in our future relations, we would be most willing to host any of your e-mail servers. I assure you that the DPRK has many well-trained computer specialists, and we would treat your computer as we would treat one of our own.”

Canada: “Hey! No way, hoser! Take off, ay? There are reasons that we prefer to be neighbors rather than family. We like our prime minister just fine, thank you, since he’s cultured and refined. Besides, our beer is much better than yours!”

Excuse Me—Have You Checked the Calendar? 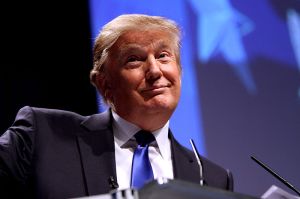 No matter how you slice it, it is 2015—which is NOT A PRESIDENTIAL ELECTION YEAR!

I don’t care who is ahead in the polls. It is NOT A PRESIDENTIAL ELECTION YEAR!

I’m not interested in the Fox channel debates because it is NOT A PRESIDENTIAL ELECTION YEAR!

I take democracy seriously, but political theater has nothing to do with the democratic process. It’s essentially one more way for the media to huckster products and advise us to “Ask your doctor if [name of drug here] is right for you.”

Oh, and by the way, the skills needed to be a politician running for office and the skills need to successfully execute that office have nothing to do with one another.