As Silent as a Tomb 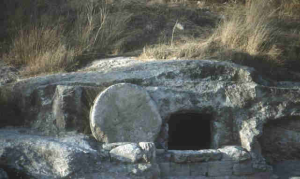 Holy Saturday, Jesus’ body has been laid in the tomb. I don’t usually think much about Holy Saturday—it’s kind of the runt of the litter—the unappreciated day of Holy Week.

On Holy Saturday, was Christ aware of His body lying there? I’ve always felt that at death I will discard my body like the first stage of a rocket and launch the next stage. But Jesus wasn’t moving on just yet. When the Risen Christ revealed himself to Mary Magdalene the next day, He told her not to hold onto Him because He had not yet ascended to the Father. If He was aware of his body in the tomb, was he glad for the quiet after the screams of the crowd, first praising him then demanding His death? Was the cool comforting after hours on the cross in the scorching heat?

On Holy Saturday, the Apostles, as far as we know, were busily doing the only logical things—running and hiding from the authorities, frightened, confused, and bewildered.

And what about the Jews who had demanded His death? Did they go home to a pleasant celebration of the Passover Feast as if this was just a normal event? What about the Roman officials and soldiers who knew the whole event was bogus with an illegal overnight kangaroo court? One of the soldiers had been shown the truth and had proclaimed that, “Surely this was the Son of God.” Did Pilate resent being played for a patsy by the Jews, forced to do their bidding even though as governor he was supposed to be the one in charge.

How many had second thoughts and regrets once the mob mentality had passed? How many asked, “What have I done?”

And one last thought. I am amazed at places where I unexpectedly find God, one of which seems at least semi-appropriate for today. In the Harry Potter series, Harry and Hermione find Harry’s parents’ gravesite. Included on the stone is the inscription:

“The last enemy that shall be destroyed is death.”

which plays in integral part in the plot. It is also a quote from 1 Corinthian 15:26 recounting how Jesus conquered death. 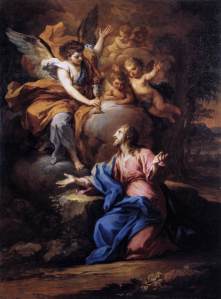 Christ in the Garden of Gethsemane 1746
Pinacoteca, Vatican City, Vatican

It seems odd that we call this Holy Week. After all, it’s a week when everything seems to have fallen apart.

“Holy Thursday” – Jesus asks for Peter, James and John to pray with him, but they fall asleep. He’s betrayed by one of his closest followers. Those charged with representing His Father are the ones orchestrating His demise. His trusted right-hand man denies Him.

“Good Friday” – Jesus is tortured, humiliated, abandoned and condemned to a death reserved for slaves who threaten the emperor. His own people don’t so much choose Barabbas to live as condemn Jesus to die.

“Holy Saturday” – The hope for the world lays cold and dead in a sepulchure.

But, as God told Samuel as he looked at each of Jesse’s sons, and as Jesus told Peter – God sees things differently than we do and His thoughts are not like ours. The week is Holy because it unfolded according to God’s plan – not ours.

Saturday – A Day of Rest 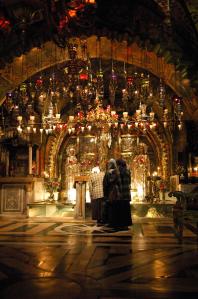 Church of the Holy Sepulchre

In the Old Testament, God the Father rested from Creation on the seventh day.

I suspect that it was no coincidence that after His death, Jesus His Son also rested on the seventh day.

God always shows us how His plan flows together in such a beautiful manner.