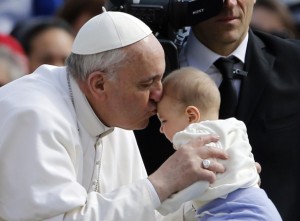 If I am pro-widget, and I listen to only those commentators who are pro-widget; if I only read pro-widget articles, I am not being intellectually honest.

On the other hand, if I am willing to hear those who are anti-widget, those who are pro-widget-substitute, alter-widget, pre-widget, post-widget as well as pro-widget, I am forced to use my intellect to discern a rational resolution.

First, Pope Francis worked as a bouncer at a night club. He also ran tests in a chemical laboratory and swept floors. In addition, after he became a Jesuit, he was the “laundry guy” for his monestary.

Limbaugh’s position on many issues strikes a chord. Personal responsibility? Agreed, we don’t have enough of that. Does competition encourage innovation? Yes. It encourages people to come up with a better product.

But it can also encourages people to “cook the books” to make things look more attractive than they are.

Before I got established I did various jobs that weren’t career focused. Fast food worker? Yep. Library clerk? Done that. Retail sales at the mall? Three different jobs. Bouncer? Sorry, too short, and after working in the Emergency Room, not willing to take on big hostile drunks.

There are many entertainment figures who I never want to meet because I am afraid that I would be completely put off by them. I may like their music or movies or whatever, but know that a real life encounter would burst the bubble.

There are a few who I would be willing to meet in person – just to find out what they’re really like. G. Gordon Liddy is one, as is Rush Limbaugh.

Don’t ask me why.

On the other hand, I would be both thrilled and terrified to meet Pope Francis.

Thrilled to be encouraged and inspired.

Terrified with what he’d expect me to do.