Today, an interview with a man who needs no introduction. Good evening sir.

Good evening. It’s a pleasure to be here.

The world today is chaotic, yet in other ways, not so much. It was not that long ago—less than a century—when a number of nations were either at war or threatening war.

It has calmed down a bit, but one never knows when some radical leader will appear, appeal to those who have nothing to lose, and create all kinds of mayhem.

As the leader of the world’s only superpower, you have, in many ways, a responsibility to keep some semblance of order in the world.

That’s much easier to say from the chair you’re sitting in than from my chair. It’s a lot of responsibility to commit our blood and treasure to some fracas in a far-off land. Maintaining a military that can accomplish that is expensive and complex. When we station troops in some trouble spot, we still have to keep them supplied with everything from food to weapons. That supply train itself is expensive. People forget that our troops are stationed around the world—Europe, Asia, Africa.

Not to mention the fact that your primary duty is keeping the people back home happy.

The economy is always a major issue with the citizens. Everyone wants protection, good roads, and plenty of fresh water, but no one likes paying for those services through their taxes.

And then there’s politics—a truly demanding and dangerous game.

Dealing with politicians is different than dealing with any other group—they’re all trying to hang onto their power, and line their purse. I swear, there are senators that would stab me in the back, if given half a chance.

Well, let’s hope that they never get such a chance. I know your time is precious and your schedule full, but I do wish to thank you for taking time today.

The pleasure is mine.

Ladies and gentlemen, let’s have a round of applause for the most powerful man in the world—Julius Caesar. 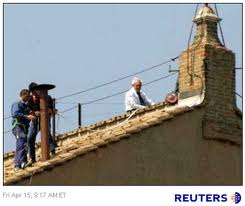 Reporters seen here sniffing around the chimney of the Sistine Chapel, anxiously awaiting the first sign of smoke.

This just in. Cable News Headlines has just been informed that the Catholic Church still has no Pope! Reliable sources who spoke on the condition of anonymity have reported that the College of Cardinals has not even voted once!

Our reporter, Felix Paparazzi is live at the Vatican.

Felix: “It’s looking pretty grim here as the Catholic Church wanders aimlessly, leaderless, without direction. Catholics around the globe are distressed and in despair with the Church’s hierarchy refusing to act. It’s rumored that the cardinals’ paralysis is a direct result of global warming!

Earlier today I was able to interview Monsignor Nino Fabreze and here’s what he had to say.”

Felix: “Why do the cardinals refuse to act? What are they waiting for?”

Monsignor Fabreze: “Well, this is a process steeped in hundreds of years of tradition. The first thing they are waiting for is for all of the cardinals to arrive here in Rome. Once everybody is here, then they can start the process.”

Felix: “Well, there you have it, the Catholic Church in crisis! Back to you in the studio.”