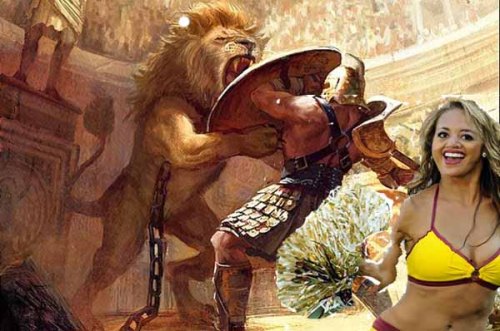 Aaron Hernandez (the late football star) is in the news because he committed suicide while in prison after he was sentenced for murder. His dead body provided shocking information that medical science was not able to discern; his autopsy showed chronic traumatic encephalopathy.

Now, let me get this straight—it’s the twenty-first century, and instead of having flying cars (dammit!) we are just beginning to realize that if you hit someone in the head, over and over, it affects them. It impairs their judgement, causes mood swings, and inappropriate behavior.

Well, we’d better stop that—unless getting hit in the head is part of a professional sport that generates millions of dollars in revenue.

Sounds curiously like the justification for the gladiators fighting to the death in the Roman Coliseum. That, of course, pleased the crowds, but was barbaric.

We’d never stoop so low today, but, if it has major network coverage, instant replays with everything coordinated to accommodate commercial breaks, and attractive cheerleaders, it’s okay. Hell, we’ll have a dedicated section of the newspaper every day!

Being surprised that repeated head trauma causes problems is kind of like the medical logic that “if you shove an ice-pick up somebody’s nose far enough so that it reaches the brain and you wiggle it back and forth, they act differently afterward.”

Is it just me, or are we missing the blazingly obvious?

Maybe I should just shut up and bang my head against the wall repeatedly, until it makes sense.