I grew up in Toledo, about an hour south of Detroit, so I feel a personal twinge about the financial disaster Detroit now faces.

It wasn’t always so. They used to say that, “What’s good for General Motors, is good for the country.” Supposedly GM had to keep its market share below 51% to not run afoul of monopoly laws.

How did Detroit go from being on top of the world to bankruptcy? 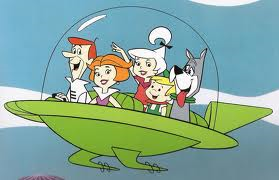 They’ve been promising us flying cars for years. “Thunderbirds,” the 1950’s black and white marionette space show had flying cars. The Jetsons made it practically a promise, and, if that wasn’t enough, we had the hover cars in “Back to the Future.”

So, Detroit, it’s all Hollywood’s fault.